I expected to have brown eyed babies. I still may someday but so far these two still have blue eyes.
Rachel's eyes are a clear deep blue with a much lighter inner circle of dusky light blue.
Sam's eyes are a greyer blue and for weeks now I think I've seen a hint of brown or hazel sneaking into the inner circle right by the pupil.
I want to remember the time when they change. Eyes are so expressive and the colour can be so distinctive that I look forward to seeing what they will be someday.
We've had two big 'firsts' with Sam this week. He now rolls over when placed on his tummy. He was really surprised the first time he accomplished this in his crib with Mummy and Daddy watching. Also he laughs! When I was bathing him and running the washcloth across his neck he let out the most adorable huh huh huh huh huh. So sweet!
Rachel is becoming a touchy baby when it comes to feeding. This is turning quickly into a nightmare with screaming every time we offer the bottle. Unfortunately she's a terrible nurser so this is leaving us in a tough situation. The Dr had little to offer as far as suggestions. Just tough it out, it sounds behavioural rather than a physical issue. GAH! We may go crazy.
Posted by RoaringS at 12:50 PM 1 comment:

Sweet Rachel is such an independent girl. She is so happy to lie around and look at her toys and smile and bat at them with her hands or talk to her mobile. When she's done, her sounds become little shrieks and that's when she's ready to chat with you and give lots of smiles.... or is ready for a nap.
Rachel sometimes doesn't like to be held, would rather just lie quietly and do her own thing or talk to you without being held. This is a thing of beauty at bed time and during the night. You just put her down and she is usually content to fall asleep on her own or with the help of a soother. What an easy baby!
During the day Rachel likes a nice cuddle to sleep for naptimes, which we are generally very happy to offer! Diaper changes are a great time to chat with her and get lots of smiles.
Rachel's hand coordination is much better than Sam's. She is regularly finding her thumb and chewing on it for a while. It's adorable!
Rachel has some quirks too, she sometimes will not eat if you are holding her. She cries and cries, wanting the bottle but will not drink. The solution: put her in her crib for a couple minutes and then feed her there. Crazy!! I'm going to ask the Dr about this.
Rachel continues to be a beauty with her hair growing thick and dark. She is smaller than Samson and feels like she's several pounds less but we'll find out exactly at the Dr apt tomorrow.
Edit:
Rachel is exactly 10lbs and quite a delicate flower. :) Her hands are tiny little things and she's getting very good at batting her toys around and particularly likes to smile at toys with faces on them.
Rachel has a funny habit of rubbing the soles of her feet together during feedings or diaper changes. It's like her toes are playing with each other. She's just started rubbing her eyes when she's tired. SO Cute! She also tends to go cross eyed when looking at things close up which can be a little freaky and sometimes very funny....no concerns from the doctor about this thank goodness.
Posted by RoaringS at 12:22 PM 1 comment:

We're at 12 weeks! In some ways I can't believe the time has passed and in others it seems like an eternity.
Samson at 12 weeks really, really, really likes to chat and be in on the action and conversation with people. When he's happy, he is SUPER happy, full of smiles and coos and SO interested in finding a way to communicate with you. He loves being held.
For some reason Sam doesn't have a lot of patience with toys and his mobile. He gets excited and then seems to get frustrated. He doesn't recognize his own hands quite yet but sometimes will notice them and be fascinated.
Sam is increasingly aware of Rachel and will gaze at her with interest in the crib.
Sam also seems to fight sleep. He gets crabby and if you don't find a way to get him to sleep quickly, he can work himself into a total state of distress. We can sometimes avoid this during the day by getting him into the swing quickly but at night it seems unavoidable.
Every single night we spend at least an hour with a screaming, fighting, exhausted Sam. It's hard to tell if there is a physical issue such as extreme gas pain or psychological issue like over-stimulation. Either way, it's brutal on Sam and on us. We will keep trying different things to find some kind of solution but if nothing else I'm hoping that it's something that he outgrows over time. Anyone have any suggestions??
Edit:
Sam is exactly 11lbs and I would be remiss if I didn't include a few more details about him at this stage. He is SUCH a BOY. It's hard to explain how but he just is such a total boy, in his sounds, his physicality, his actions and expressions. He is very physical and loves to kick and hop and use his entire body to communicate or get excited about something. He's really close to rolling over too. Seems like he's not going to have fine motor skills for quite a while but he'll probably crawl first. His hands are like little boxing gloves and his chest is broad like a football player.
Sam loves music! He listens very well when you sing to him and using music to help him sleep has been an amazingly helpful discovery for Mom and Dad.
He also loves to sleep in bed with Mom and Dad, particularly in the mornings.
Posted by RoaringS at 11:38 AM No comments:

I do adore them. The smiles, the coos, the sleeping faces, Rachel calmly looking around the crib before she falls asleep, perfectly content to be on her own, Samson passed out on my shoulder after nursing. Oh my girl is wonderful and amazing and my boy is precious.
I wish I could bottle the good moments and drive out all the anxiety I have so much of the time. It does me no good to stress about them crying when they aren't. 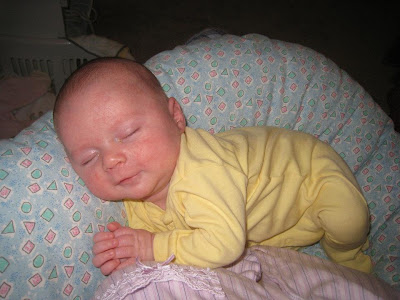 Sam after a satisfying nursing session. 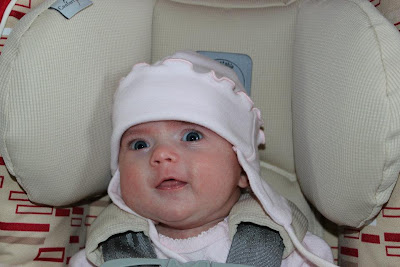 Rachel ready to go out and see the world. 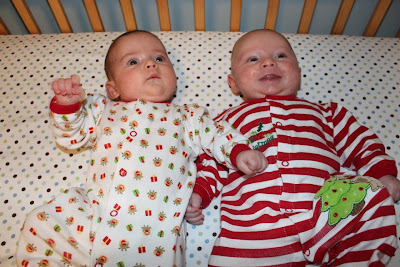 Christmas sleepers for the babies from Clare. 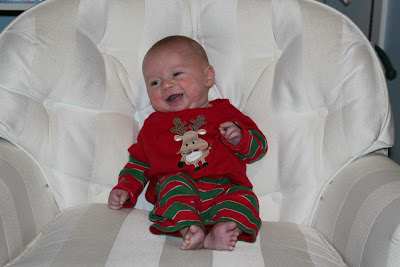 Sam in his Christmas outfit from Mommy and Daddy. 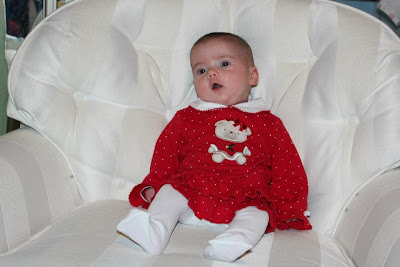 Rachel in her Christmas outfit from Mommy and Daddy.

RoaringS
In my mid-thirties i am appreciating, laughing, striving, hoping, and sometimes suffering as I discover the joys and challenges of mothering twins. The word Roar makes me feel strong. This blog is a little piece of me put out for those I know (and some I don't) because in my struggle with fertility I learned I need more connection, more communication, more opportunity to express myself and more support.....and most of all, I need to surrender to all that life has in store for me.