Had a fabulous time trick or treating.... far better than I ever thought possible. We went out with 4 other families so there were 11 kids in all. And Sam and Rachel really took their cues from the other kids. By the second or third house Sam was going up to the door and opening his little bag and Rachel was never more than a step behind.
Sam made sure to remark on all the 'Punkeh' (pumpkins) and described them all as 'HAPPY' and the skeletons were HAPPY too which relieved me. There was only one house that scared them and it was when scary sound effects started, Sam turned on his heel and was done with that one even though other kids (the big 3.5 year olds) went anyway.
Rachel seemed to stick very close to Daddy, while I had to stick right by Sam or he would have walked on his own pretty happily. Because of that I feel like I missed half of the experience with Rachel but that is always the case.
Here's my little Pebbles and Bamm Bamm before we left. 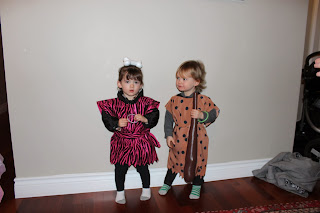 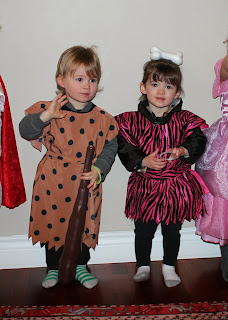 I managed to sew one side of each of their costumes together and just safety pinned the other side in case they didn't quite fit over their shoulders with their coats on. They did fit but I'm glad I did that anyway.
Here they are in action....oh yes, Pebbles appropriated the bamm bamm stick about half way through and Sam only got it back at the very end. 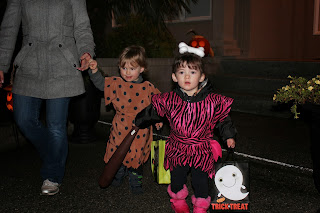 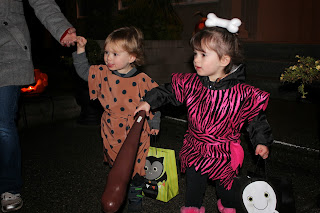 It was a very successful outing and my theory remains in tact - keep your expectations low and you will never be disappointed.
I wanted the costumes to be simple and fast to make but recognizable. Done! Everyone knew what they were.
I wanted them to knock on doors and enjoy/participate in this weird tradition of getting candy. Done! They walked the entire route by themselves, held their bags out and carried their own bags the entire time. That shocked me and made me proud.
We probably went to 10 houses and that was plenty. And the very best part is they're still too young to understand that what they got was candy! So when it's all gone tomorrow, they won't know to ask about it. Woohooo!
Posted by RoaringS at 8:47 PM No comments:

Soon we will have to cut Sam's hair for the first time. But until then I'm taking a lot of pictures of his luxurious locks of golden hair. For a child that came into this world looking a little ...hard done by? ... he sure has become a beautiful boy. He just needed some hair!
Here they are all dressed up for their birthday party. 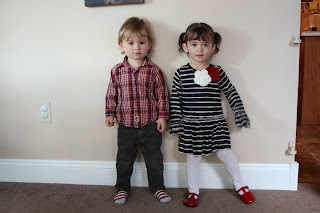 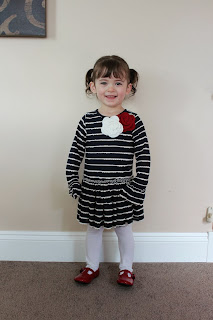 Sam showing off his new hat, a gift from their friend Lucy, a fellow IVF baby. Am I biased or do the doctors really do pick the cutest little embryos ever? 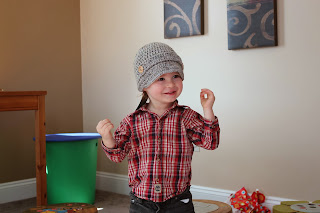 Sam was a much better blower than Rachel when it came to the candles but it still took a bit of practise. 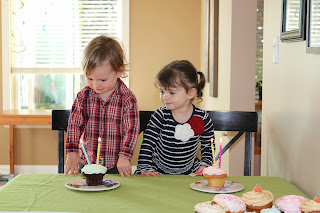 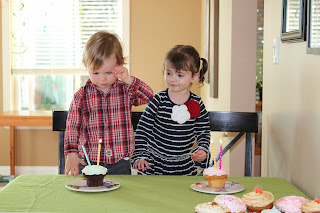 He was a little surprized when the candle actually went out. 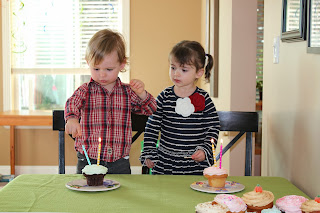 As they get older, I think this is what I'm going to miss the most... 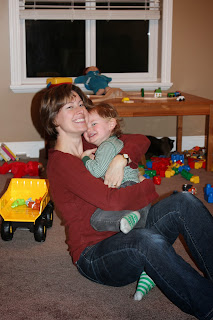 them running into my arms for hugs.... 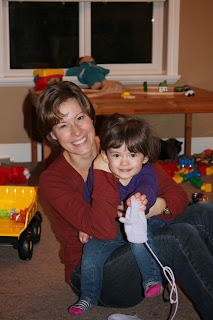 them snuggling in for hugs.... 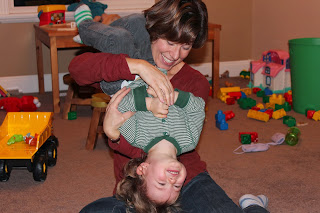 and the wrestling and tickles and kissing that happens as part of being so physical with them. 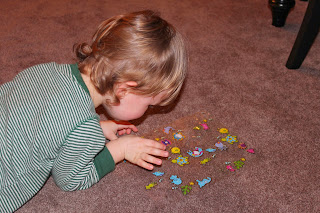 Sam and Rachel both love stickers and picking the one they want is getting to be a longer and longer process. 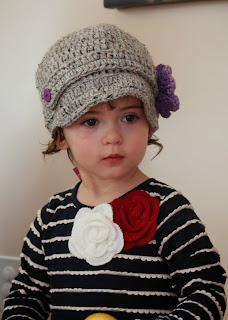 Rachel in her hat. Oh it is glorious and so is she!
Posted by RoaringS at 8:02 PM 1 comment:

It's official! We have two two-year-olds!

We had a good celebratory weekend with a couple of small friends over on Saturday for gifts and cupcakes. Then on Sunday I took the kids up to Grandma and Grandpa's early so that Daddy could get things done around the house and garage and get a night 'off.' Then he joined us on Monday for Thanksgiving and more cake and presents. It went very well overall and is definitely something we'll do more of over the coming years.

Sam quickly figured out how to blow out the candles. Rachel was determined to make it happen and took her quite a bit of practise. Every time she blew her bangs would fly up but the flame wouldn't flicker. So she kept trying and we kept relighting them until she was satisfied with the experience.

Sam and Rachel are showing some solid 2-year-old behaviours - some of which I love and some of which I will tolerate until they pass. :) I love the role playing that is starting and the preferences for specific clothes. I don't love the unreasonable attachment to specific outcomes which they can barely articulate but mean the difference between happiness and total devastation. All I can tell is it has something to do with wanting to not sit at the table to eat and the whining nearly makes my ears bleed.

I love their mispronunciations: Coat is a new word but they say 'coke.'
Sam said snake today quite clearly, ok it was more like shnake. So if he can say shnake, why not sham? The both still call Sam RaeRae if they need to use a name. But they also call other women Mommy if they need to get their attention, so names aren't that meaningful to them yet.

So last night, I got out the snot buster and gave Sam the little spit up blanket to lay on the floor while I put some saline into a glass. Sam diligently waved and fluffed that blanket trying to get it to lay flat. After I helped, he quickly lay down, saying 'noe,' pointing to his nose, clearly aware of what was coming. I held his head tipped to one side and squirted. He gagged, I sat him up, he declared, 'Done.' I said, "one more side." He lay back down, I tipped his head to the other side and squirted. He gagged and I sat him up to give his nose a good blow. He was so agreeable with the whole thing, so happy to prove that he knew the process even though he doesn't like the experience. My sweet, sweet children!

RoaringS
In my mid-thirties i am appreciating, laughing, striving, hoping, and sometimes suffering as I discover the joys and challenges of mothering twins. The word Roar makes me feel strong. This blog is a little piece of me put out for those I know (and some I don't) because in my struggle with fertility I learned I need more connection, more communication, more opportunity to express myself and more support.....and most of all, I need to surrender to all that life has in store for me.